What is multiple linear regression??

Before we to next step, we need to understand several assumptions that data must meet in order for multiple regression to give a valid result.
So.., we need discuss these assumptions.

Okay,.. What are the assumptions in multiple regression????

In previous article already mentioned a bit about multiple regression assumptions points. However at this time we are going to discuss a more detail.


Let's take a look at these eight assumptions:

our dependent variable should be measured on a continuous scale (it is either an interval or ratio variable).
Examples of variables that meet this criterion include revision time (measured in hours), intelligence (measured using IQ score),
exam performance (measured from 0 to 100), weight (measured in kg).

we need to be a linear relationship between the dependen variabel and each of independent variabels.
we can check using scatterplots and then we visually inspecting scatterplot for linearity.
If the relationship displayed in our scatterplots are not linear, we will have to either run a non-linear regression analysis or "transform" our data.

The data we have got to show the homoscedasitas.
In simple it is where the variances along the line of best fit remain similar as you move along the line.
To see it can use  plot the studentized residuals against the unstandardized predicted values.
by looking at the visuals, the residual data is spread evenly between zero point.

we need to check that residuals (errors) are approximately normally distributed.
Two common methods to check this assumption include using:

(a) a histogram (with a superimposed normal curve) and a Normal P-P Plot; or
(b) a Normal Q-Q Plot of the studentized residuals.


Okay, after we both had studied the material above,
so, let's learn how to use multiple regression analysis with applications R. 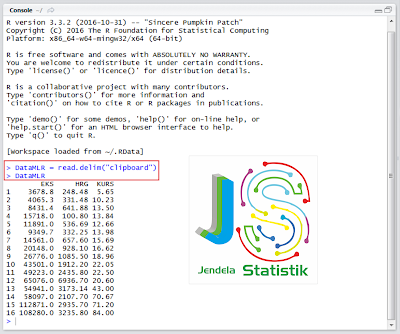 Next we will form a model for multiple regression with writing the code : 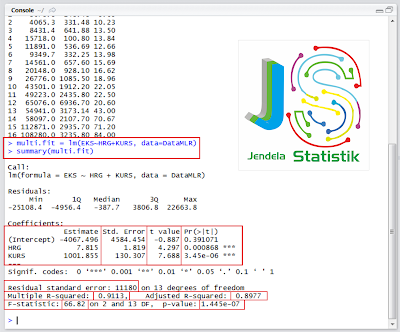 The summary the results of the linear regression model, i.e,.
Performance Measures: Three sets of measurements are provided.

Interpreting R’s Regression Output
Reliable test model or test the feasibility of a model or a more popularly called as F-test (also called it a simultaneous test model) is an early stage of identifying the regression model being estimated is worthy or not.
Based on the F-test is obtained  F calculated 66.82 with P-value 1.445e-07.
Because p-value is smaller than 0.05 regression model then can be used to predict EKS or is simply a variable KURS and HRG together effect on EKS.

Residual standard error: 11180, the smaller the value of the standard error of the regression models would make the more precise in predicting the dependent variable.

Of two independent variables entered into the regression model all significant (T-test) at 0.05. from here it can be concluded that EKS variable was influenced by variable KURS and HRG equations mathematically:

Constants of -4,067,496 States that if the independent variables are considered constant, then the average export reduced by 4,067,496.

okay, next steps is  we doing assumptions test
first step is multicolinearity Test

We can do by way of viewing the values test VIF, i.e.,
library(car)
vif(multi.fit) 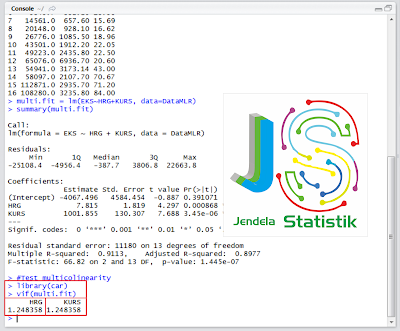 We can do by way of viewing the values durbin watson test
library(lmtest)
dwtest(multi.fit) 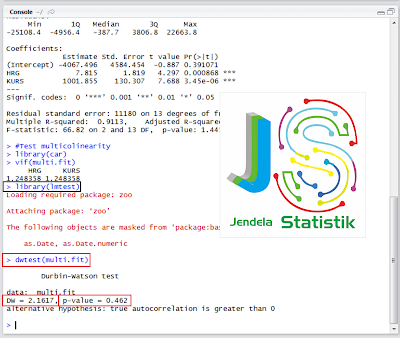 Value of the durbin watson will be compared to the criteria of acceptance or rejection will be created with the value of d is determined based on the number of free variables in the regression model (k) and the number of sampelnya (n). The value of the dL and dU. L and d can be seen in Table DW with the level of significance (error) 5% (α = 0.05). 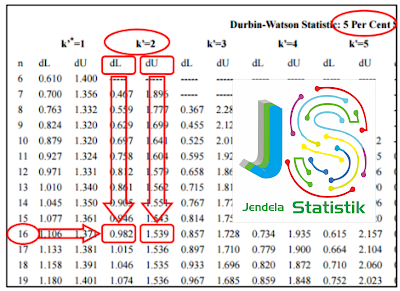 Table of the Durbin-Watson values indicate that the dL = 0.982 and d = 1.539 so
can be determined or whether autocorrelation occurred criteria as shown in the picture below.

Count of 2.162 DW values larger than the smaller of 1.539 and 2.481 meaning are on area there is no autocorrelation. Thus it can be concluded that in a linear regression model does not happen autocorrelation. 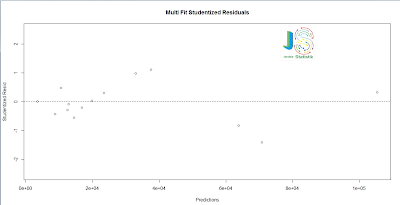 The results of the test of normality can be seen from the image of a Normal P-P Plot below. Need to be reminded that the assumption of normality is in the classical assumptions of the OLS approach is (data) residual linear regression models established normal distributed, not independent variable or dependent variable . Criteria a (data) distributed the residual normal or not Normal approach with a P-P Plot can be done by looking at the distribution of points on the image. If the distribution of these points approach or meetings on straight lines (diagonals) then it is said that (data) residual is distributed normally, but when spread those points away from the line and thus are not distributed normally. 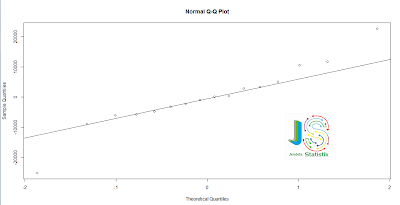 The distribution of the points of the image to Normal P-P Plot above relative approaches a straight line, so it can be inferred that the (data) residual is distributed normally. These results are in line with the classical assumption of linear regression with the OLS approach.

Overall test assumptions are met then the model can be said to be BLUE.
Nice regression model means to be used in this case. 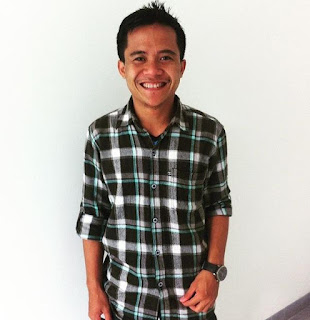